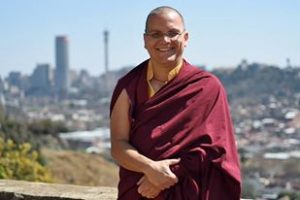 Jampa Dorje, born in France, and trained as a nurse, met the Dharma when he was a teenager, initially following the Shangpa Kagyu lineage. After receiving the transmission of Mahamudra from HE Tai Situpa, he was ordained and was allowed to join the  Shedra (Tibetan collage) at Sherabling Monastery near Dharamsala in India, following the traditional Tibetan curriculum of study, debate, and Mahamudra meditation for 11 years. At this time he also volunteered at the dispensary. He has studied the key philosophy texts of the Kagyu lineage, as well as the Tibetan language. He is in much demand as a translator, having translated for His Holiness the Karmapa. He also co-founded Esukhia, a research center for Tibetan Language which has an online and immersion Tibetan language school where native Tibetan speakers provide one on one lessons. Jampa Dorje is very well known to Tai Situpa’s students as the organizer of the Palpung Institute programmes.

Jampa Dorje will be teaching at out centre on the weekend of the 16th and 17th of September at KSDJ after the retreat with Drupon Rinpoche at Tara Rokpa centre, and KSD Harare, where he will be translating for Drupon Rinpoche into French.

One of the most profound yet practical ancient Tibetan texts is The 37 Practices of the Bodhisattvas by Thogmay Zangpo. Jampa Dorje will discuss the key points of this inspiring text, and their application to our spiritual journey. Jampa Dorje will include short sessions of meditation throughout the weekend.