You are here: Home › Past Events › Teachings and Discussion on the Dharma with Lama Katen 10 December 2018 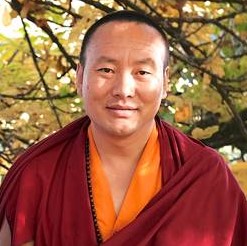 Lama Katen, the deputy Abbot of Samye Ling Monastery in Scotland, will be giving a Dharma talk at KSDJ There will be a chance for discussion at the end of the talk. This is a wonderful opportunity to connect with Lama Katen. There will be no charge for this talk – however dana for the teacher would be appreciated.

Lama Katen is deputy Abbot of Kagyu Samye Ling Monastery and a nephew of Chöje Akong Tulku Rinpoche. He received full ordination from Thrangu Rinpoche and studied for many years at Thrangu Monastery in Nepal. He spent five years at Thrangu Monastic College and then undertook the traditional three-year, three-month retreat, followed by a six-month Kalachakra dark retreat. His root Guru, Drupon Rinpoche, has requested him to teach.