The Essence of Buddhism and the Four Dharmas of Gampopa

We are delighted to welcome Drupon Rinpoche to our centre in October.

Public Talk: The Essence of Buddhism

The Four Dharmas of Gampopa

In this classic text, Gampopa, one of the foremost Kagyu forefathers, describes the essence of the Buddhist path in four profound lines that can be easily remembered.

These Four Dharmas of Gampopa contain a complete path for an individual to attain full enlightenment within one body in one lifetime.

These teachings are donation based – please donate according to your means. 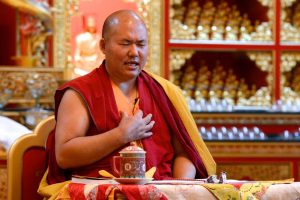 An Introduction to Drupon Rinpoche by Dónal Creedon

If you have ever wondered whether the ancient stories of the siddhas and adepts were a thing of the past or even myth, then perhaps you might consider the life and teaching of Drupon Khen Rinpoche Karma Lhabu.

From an early age Rinpoche underwent long and rigorous training under the direction of supremely accomplished masters of mahamudra and dzogchen. Among his teachers were both famous lamas and unknown yogis of all lineages and especially the Kagyu and Nyingma lineages. These were lamas who had cast worldly concerns aside like so much spittle in the dust and were noted for living in extreme simplicity, far away from the rattle and din of modernity.

Rinpoche has a special love for such anonymous hidden yogis – he too offered all he owned to his lamas, abandoning all cares in his pursuit and practice of Dharma. Although he was seriously ill and close to death several times, for Rinpoche it was no big deal. His attitude was one of carefree indifference as if going for a nap. He lived, slept and absorbed the teaching in an environment that for most people today is unthinkable.

Very early on there arose in Rinpoche’s heart a natural and profound understanding and realisation of both view and meditation that is now the very fibre of his being. This, combined with many years of intense study at Serta Larung Ga and other seats of Dharma, meant he came to possess a brilliant command of the teachings and pith instructions. His lamas considered him their heart son, and in his early twenties they instructed him to be retreat master and to start caring for students.

The ways of the worldly – prioritising fame and profit, numbers of disciples, centres, and buildings per se – are anathema to his way of thinking. Rinpoche’s central focus is on serious students and on creating a climate that will nurture the authentic Way-seeking mind and help the students to become firmly established in the way of truth. The main thrust of his approach is to thoroughly ground the students in Dharma through intense and sustained teaching combined with practice.
Most of the year Rinpoche resides at Thrangu Sekhar Retreat Centre in Nepal, where he guides and gives daily teachings to two groups of retreatants: a traditional three-year retreat for the lamas of Thrangu Monastery, and a six-year programme of study, contemplation and meditation for students of all nationalities. The retreat environment, the teachings and practice provide the alchemical container for the work of transmuting the base metal of ego into the gold of bodhicitta. And Rinpoche is like the master alchemist guiding the entire process. He gives tremendous importance to the foundational contemplations and particularly lojong or mind training. These are among the most effective means for disrupting the ego’s tenacious tentacles and for planting the seeds of the good and wholesome.

In this respect Rinpoche gives great importance to listening. He points out that we are not actually able to listen to Dharma. Why? For the simple reason that the deep rooted prejudices and assumptions block the ability to listen and understand. Thus the teachings don’t penetrate. Listening implies, among other things, the ability to understand the direct relevance of the teaching to the disciple’s mind and life.

Rinpoche’s broad and vast vision will not satisfy the demands of the mediocre who feed on spiritual candy floss and float around from place to place like tourists looking for entertainment. The ideal students for him (in the opinion of the writer) are those seekers who long to drink from the sacred well of truth and, seeing the sorrows of all beings born of space-time; wish to be balm to them; wish to be rain and blossom to them in the fields of time; wish to bring them to the true place of refuge; unsurpassable complete enlightenment. Nothing less. Taking the teachings into the depth of their heart with indomitable spirit, they set forth on the heroic bodhisattva path.
As a guiding teacher Rinpoche has the unique ability to communicate teachings often seen as abstruse and remote in a very direct and personal way. He impacts the student not only with lucid explanation but also, in an uncanny way, reveals their thought processes and neurotic blind spots. His words are personal to our own thinking and act like a close mirror to our habitual psychological patterns and the mind poisons. This can be a little unsettling, and the immature may even see it as a kind of personal attack. For the more receptive student though, his teachings serve as a source of self-revelation and visceral learning that cuts through the dross and stupidity of ego. His teaching is the sword of prajna striking from a Heart filled with the noble intent of the Sublime Buddhas. In other words, Rinpoche teaches and acts with immense love and infinite care. He is a not a lama who remains aloof and remote in a spiritual ivory tower. He is more like a loving parent whose tender care extends to the totality of the student’s life.

The way he lives naturally displays the qualities of one whose mind is suffused with Dharma, and is as far from the worldly mentality as the sun is from the earth. He has an easy way with life and death and an innocent generosity. In the person of Rinpoche one finds the embodiment of the bhikshu’s discipline and rigour, the vast compassionate mind of the bodhisattva and the incandescent free spirit of the vajrayana siddha.

Those who have been students of Rinpoche will know this is no exaggeration.