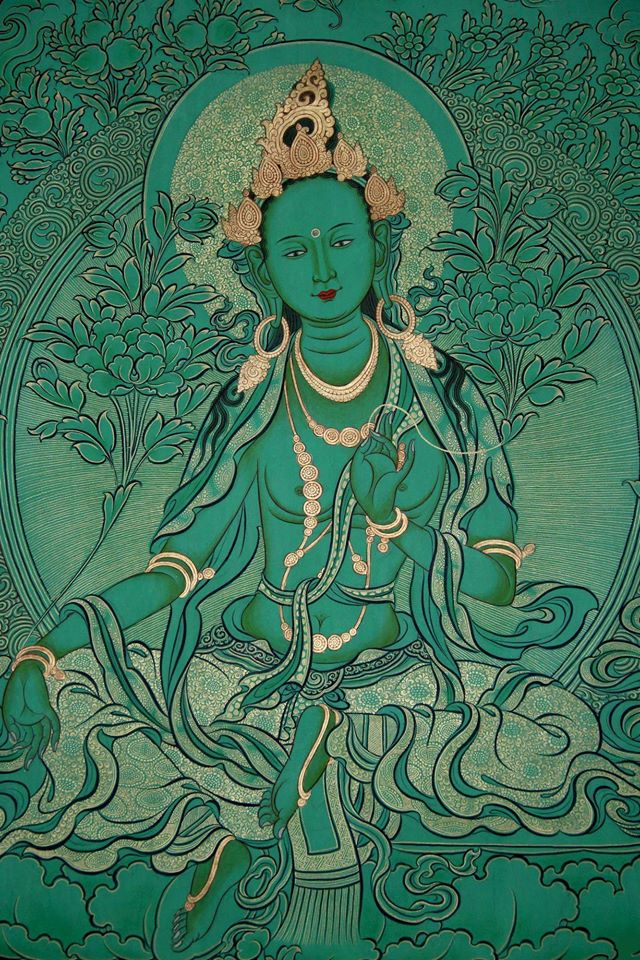 Who is Green Tara?

Green Tara is a beloved meditation deity in the pantheon of Tibetan Buddhism. She symbolizes the compassion and action of all the Buddhas, and is able to swiftly liberate us from fears.  She is usually depicted in traditional art with her right leg bent, ready to jump up to help all sentient beings. She has a loving expression on her face as she is regarded as the mother of all the Buddhas.

“There is another legend actually, that says that Tara was a princess many millions of years ago, kalpas ago. During the time of a Buddha called Amogasiddhi there was a princess called Yeshe Dawa. She became a bodhisattva, because she had a very courageous nature, she was strong, fearless and committed and she made a commitment that from now onwards to work on becoming so powerful and highly attained, that I can help hundred thousand beings every day. Her confidence was so strong that she felt she could do that much. She did not want to do just a little bit, she wanted to do really a lot, the strength of her courage was so big that she thought she can do more than normally, more than just being a nice kind lady, she can actually work very courageously and strongly and help that many beings every day.

Because of this strong conviction, courage and fearlessness, she became an enlightened bodhisattva. Whatever she did, everything had a strong effect of helping and benefiting others and she attained different bhumis. When she became enlightened she dedicated all her positive actions saying whoever is connected to me in any way, may they be able to have very swift progress, may they have swift benefit, may my swift actions affect them.

And also she made a commitment that she would only be reborn in a form of a female, which is the unusual part of Tara. Everywhere you read about Tara it says she made this commitment to be reborn as a woman, even though she was encouraged to be born as a man but she said no, she wanted to have this form as a woman, appear in a form of a female and have this activity of very swift action to help beings.” Lama Zangmo. Read more on the benefits of Green Tara practice here.