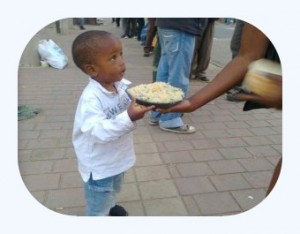 The Rokpa Soup kitchen was started in 1995 by residents and community members of Kagyu Samye Dzong Johannesburg in Kensington, which is one of the oldest suburbs of Johannesburg. Soup, peanut butter sandwiches and fruit are delivered to a stop in the inner city of Johannesburg once a week. The recipients are homeless people living on the streets, with a large number of immigrants from other African countries who have come to seek refuge in this City of Gold.

Other activities of the Rokpa Soup Kitchen include collection of clothes and shoes, children’s toys and stationary, and non-perishable food items from community members, which are distributed to either the soup kitchen clients or other organisations such as Tara Rokpa Centre in the North West Province, Tomorrow Trust, and Village Safe Haven. There is a container for donated items in the reception area of the Buddhist centre in Kensington.

If you would like to contribute in some way, or for more information, please contact our office on 011 614 1948 (weekday mornings) or email johannesburg@kagyu.org.za.

Glimpses of the Soup Kitchen in Action – click here.