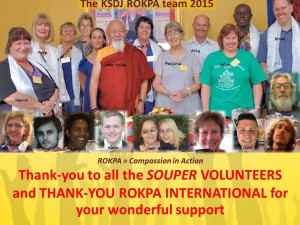 The KSDJ Rokpa soup kitchen started in 1995, to provide a hot meal for under-privileged people in the inner city of Johannesburg. We provide a plate of hot vegetarian curried soup and rice, 2 peanut buttered sandwiches on brown bread and seasonal fruit.

The majority of soup recipients are men. This because of the history of male rural migrants who relocate to the city to look for work and send wages home to their families in rural areas.  In addition, many people we meet at the soup kitchen are illegal immigrants from neighbouring countries and other southern African countries hoping for a better life.  Johannesburg (the “City of Gold”) is oft thought of as a place where wealth can be made and jobs are plentiful. Unfortunately this is rarely the case. Many migrants face poverty and extreme xenophobic prejudice from locals who themselves are unable to find sustaining work.

In the last report to ROKPA, it was reported that an average of 80 people were receiving soup during the warmer months, with this number increasing to about 100 people during the colder months.

This year, the number of recipients increased to around 150 during the cold months – an increase of about one third. Even now in the warmer summertime, the number remains at around 130 people.

This speaks to the increasing poverty and desperation in the inner city and also to the quality hot meal that we provide.

The soup kitchen is run by volunteers from within and without the KSDJ Sangha.

Francoise Holley co-ordinates the morning soup kitchen preparation and works with about 5 committed volunteers who prepare the soup and peanut butter sandwiches at 10h30 every Tuesday morning at the KSDJ Centre. Sadly, Francoise steps down as ‘morning team’ co-ordinator at the end of 2016. We wish her many blessings in the future.

Lucy Pereira co-ordinates the evening soup delivery to the corner of Nind and Siemert Streets, Doornfontein, Johannesburg at 18h00 in the evening.

There are also five regular on-site volunteers (themselves homeless), who help with the set out and serving of the food, crowd control and cleaning away litter after food distribution. They are ‘paid’ by receiving extra curry, 5 sandwiches and 2 fruit. We have found that the 5 homeless volunteers seem to have grown with a noticeable sense of worth and status/self-respect amongst their peers. This is also in line with the ROKPA principle of ‘helping people to help themselves’. It also helps us volunteers tremendously of course.

The estimated volunteer hours for the soup kitchen between 1 December 2014 and 1 December 2015 amount to 686 hours calculated as follows:

The soup kitchen operates every Tuesday (closed for 3 weeks in December.)

All of our expenditure and income is audited – please see the attached financial statements prepared by Nigel Crocker.  Nigel (a bookkeeper) is employed by KSDJ.

Items donated to KSDJ (which the Centre itself has no use for) are either put on our charity table for cash donations, auctioned at our annual fund-raising event, or passed on to other charitable organisations who are better equipped to re-distribute the items.  These other charitable organisations include the Tara Rokpa Centre in the North-West  Province, St Vincent De Paul,  local primary and nursery schools (Malvern Primary School and Creche) and places of shelter for abandoned and abused children (The Village Safe Haven, Buccleuch).

Some members of the Sangha donate monies to the soup kitchen via monthly debit orders.

The soup is served in recyclable containers which we purchase at Crazy Plastics’ at a discounted rate.

Those of us who have been involved in the soup distribution in the inner city of Johannesburg for a few years have become increasingly aware of a growing sense of desperation and ill-discipline due to aggressive attitudes from a small minority of the soup recipients.

There are at times intoxicated or ‘high’ recipients who are disruptive to others and on occasion shout verbal abuse to those handing out the soup. An increasing scourge in South Africa is the use of nyoape – a drug made from mixing heroin and anti-retroviral drugs. We have seen an increase in the amount of people ‘pushing in’ to the queue and becoming belligerent when asked to take their turn. A couple of the volunteers who have occasionally helped with the evening soup kitchen distribution expressed concern regarding their safety.

Another pressing concern for us is the condition of our aged delivery vehicle which while regularly serviced is succumbing to age and has broken down three times in the past year.

Steps taken to improve orderliness and safety at the SK

We decided to visit other organisations in Johannesburg that run soup kitchens:

1.2  Lucy P then visited a soup kitchen run by the local Methodist church in Kensington.  Again, their soup is delivered from their premises allowing them to ‘invite’ people onto the property 10 people at a time, lock security gates behind them and thus maintain crowd control. What we did learn from the Methodist run soup kitchen was that they use a ‘number’ system to feed the people. That is, the first person to arrive at the church receives a coupon marked ‘one’, the second person receives a coupon marked ‘two’ and so on.  Soup recipients then organise themselves into a line according to the number issued and ‘pushing in’ is limited.

Implementing changes at the SK

Following the examples from these two soup kitchens, we instituted a ‘number’ system at our soup kitchen.  While this is helping with the unruliness of the group in general, volunteers are still more and more reticent to go to the inner city at night.

One of our homeless volunteers arrives at the distribution site an hour before the food arrives.  He issues people waiting for soup with a number working on the first-come first-served basis (except of course woman and children who are fed first).

Once the food arrives on site, the area is cordoned off using danger tape, and soup recipients move through ten at a time.

This system has vastly improved the distribution situation.

Our delivery vehicle: We will be approaching potential funders in the new year so that we can hopefully replace our aging delivery van with a reliable vehicle

The future of our Soup Kitchen Outreach program:  As the soup kitchen group, we have brain-stormed further ideas around how we could move forward should the soup kitchen in the CBD again become an issue of safety.

We settled on two other areas where we could make a big difference to people in need:

The first is a shelter for pregnant single young ladies called Bethanie.  They have asked for food (we could make the food and deliver it directly to their shelter which would be safe for us), nappies and newborn’s clothing.

The second idea is to distribute hampers to people waiting in queues at our local state hospital.  Patients can wait – literally- for days on state hospital properties waiting to see a doctor or for a bed to become available.

On 16 Dec 2014 – our last soup kitchen drop for the year – we distributed Christmas hampers.

During July (our winter), we distributed 150 blankets at the soup kitchen. These were indeed “warmly” – if somewhat chaotically – received!

Again, as mentioned above, we are looking at other areas where the safety of our volunteers can better be guaranteed. And may in future be compelled to end the soup kitchen in the CBD and rather help organisations better able to distribute for us.

In past years we have donated used clothing to The Village Safe Haven (hereafter referred to as The Village). The Village is a court-appointed place of safety for 28 children.  These children have been removed from abusive homes or are orphans and await placement in long term care or temporary foster homes.

In May they appealed to KSDJ for assistance purchasing some basics that their budget (cut by the government this year) could not accommodate.

We set aside R 3 000 for this and were able to ‘take the house mom shopping’.  We bought nappies, creams, soaps, bread, jams and other condiments for school lunch boxes, and other food necessities.

On 17 July 2015 we supported International Mandela Day by re-distributing 2 000 sandwiches to a home for the mentally challenged and a children’s’ home run by St Vincent de Paul.

TASKS NOT CARRIED OUT IN THE PAST 12 MONTHS

In the previous report to ROKPA, it was written that we intended establishing a vegetable garden on the KSDJ site.

Unfortunately, this did not happen. A committee member suggested that we could receive teaching on perm-culture from knowledgeable people from the Tara Rokpa Centre.  An appeal was sent out to soup kitchen volunteers on our whatsapp group for commitment to time working on the garden. While an offer of advice on setting up our irrigation system was received, none were able to spare the time to physically dig and maintain the garden.

We acknowledge and honour all who serve ROKPA throughout the world. In particular, we thank ROKPA Switzerland for providing funding which helps to make service possible.

The last year has seen the number of people we reach through the soup kitchen grow – to where we have served approximately 6370 hot healthy meals.

We continue to try to iron out issues of safety and crowd control.

The pool of volunteers willing to give of their time has also grown.

We definitely are making tastier soup according to some of the recipients – and thanks to Kevin – one of our volunteers who is also a chef.

We look forward to continuing with compassion in action in 2016.