REQUEST FOR LONG LIFE MANTRAS TO OFFER HIS HOLINESS 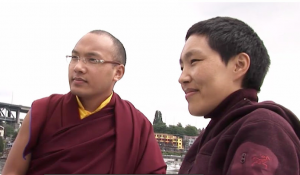 The fourth Dodrupchen Rinpoche, who is one of the greatest living Nyingma masters, has said that if the followers of the 17th Gyalwang Karmapa Ogyen Trinley Dorje accumulate recitations of this dharani, His Holiness will live long and his activities will benefit a great number of beings.

Therefore His Holiness’ sister, Jetsun Ngodup Palzom has invited all students, individuals, groups and centres to join in, and to accumulate recitations that will be said by them or their group over the next year (2016, the Tibetan year of the Fire Monkey), as an offering for the benefit of everyone. She is asking for a commitment from each individual or group who wishes to join in, meaning an accumulated number of recitations will be offered during the year by each individual or group.

On behalf of our community, KSDJ has committed to 100 000 recitations of the Dharani during the Tibetan year of the Fire Monkey – 2016 – 2017. We request that you count the numbers of he Dharanis that you recite, dedicate to the Karmapa and all sentient beings, and write your numbers in the book provided in the shrine room, or email your numbers to johannesburg@kagyu.org.za.

Here is a link to Ringu Tulku chanting the Dharani

The Dharani of the Essence of Dependent Arising

This form of mantra is used by all schools of Buddhism, and this verse in particular contains the essence of the whole teaching of the Buddha, it is recited as a dharani by the addition of OM at the beginning, and SVAHA at the end.

All dharmas originate from causes.
The Tathagata has taught these causes,
And also that which puts a stop to these causes—
This too has been taught by the Great Shramana.

Origin of the Dharani of the Essence of Dependent Arising

The verses come from the vinaya beginning “Ye dharmā hetuprabhava” and are the words spoken by the Arhat Assaji, (Sanskrit: Aśvajit) to Upatissa, who was later known as Sariputta (Sanskrit: Śariputra). Sariputta, along with his boyhood companion Kolita, known later as Moggallāna (Sanskrit: Maudgalyayana), were to become the two chief disciples of the Buddha. Upon meeting Assaji, Sariputta was impressed and asked after his teacher and the dharma that he taught. Assaji demurred, being “only a beginner”, but eventually responded with the now famous verse, and even before he had finished, Sariputta had a decisive break-through. Nyanaponika says:

Upon hearing the first two lines, there arose in the wanderer Upatissa, the dust-free, stainless vision of the Dhamma – the first glimpse of the Deathless, the path of Stream-entry – and after hearing the final two lines Upatissa [Sariputta] was already listening as a stream-enterer.